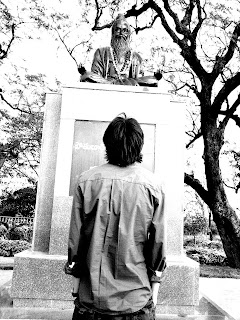 press play and then we shall talk!

No, there is simply no inspiration to do it. It couldn’t matter less or even more. I can’t do it. I don’t want to do it. I can’t force it (write that is). All of this said, and yet I miss it completely and absolutely. you are right. it will take a lot..a lot to write.

I’d rather travel..travel for a while and see the world. I want to see the color and shape of objects besides my immediate surroundings. I want to feel blue. I want to live red. I want to breathe white. I want to camouflage into black and live as abstract as I can be.

I wonder why everyone eventually wants to fit in. a rebel wants to fit in as much as any other person does, however their niches are different. Do I want to fit in? I haven’t given it a thought and I don’t really wonder about it too. It’s just fitting in…and eventually all of us do fit in somewhere..some place. And if nothing, then we’d definitely fit in 6 feet deep.


Let’s just pretend you’re alive. Do you know how much space you are taking up? If your existence were to cease, it would be taken up by someone or the other. If not, then you are taking someone else’s space.

Do you believe that there is equilibrium in this world? I feel like laughing at the very though of it. Of course there is equilibrium, but then why do I laugh? Have you ever heard of the theory – what goes around, comes around? Well, it’s nice to hear and good to console oneself with. This entire gamut of equilibrium is so misleading in itself. Someone broke your heart, treated you horribly, and raped your life twice over (metaphorically). So, now as per the little knowledge or understanding I have of equilibrium and that inane theory, one must wait for God’s wrath to fall upon the inflictor. But whatever happened to your pain? Well, that’s what equilibrium is all about, I suppose. Your pain is never avenged for. So, actually, you can never be sure whether the inflictor was inflicted or not. That sucks.

Have you heard about entropy?
about 3 weeks ago, i was preparing myself for my grandfather's soon to happen funeral. he was/is terminally ill - a brain haemorrhage resulting in left side paralysis - or so i was told rather we were told. mom left on an immediate basis, my brother followed, and i was busy with some admission formalities while preparing myself for any sort of loss. i thought about my state and then about everyone else's state post the tragedy (if it were to happen at all). no, there were no options or chances; as i said, i was preparing.

he didn't leave us thankfully or not so.. i don't know that. i don't question god's judgement. i accept it with out without remorse. that's what they teach us when we are kids and throughout our lives as well.

"Qullo nafsil zaik-a-tul maut"
quoted straight from Qur'an, it means that every living being must taste death.

i often thought of learning the funeral prayer. while i was contemplating about post-loss events, my grandfather was getting better. he's stable now but weak. i spoke to my father a few days ago about how well the venerable hunter was doing (he had seen better days of hunting than i had for sure). my father was strangely objective and i concluded that it's only a matter of time. i must tell that the trauma was missing..

i can obviously understand why he(my father) was unperturbed for it wasn't his father or so i would like to believe. i can relate my disposition to the same line of thought..

now that i think about it, my grandfather was actually rocking the equilibrium chair. i learnt that a very young man had died. D I E D is word for i want to cut the euphemism here. so, a young man died and his spot was taken by my grandfather, but for how long. soon, someone will have to..live or die.

there's no point talking about my death. i've done that a lot. i shall see to it when i am faced with it. i reserve my reactions - desperate or impromptu or even calculated - to that day.
mother is back in town, robbing me off my peace as usual. it takes a lot to smile these days. my cousins are here for vacation based torture activity. the project is co-funded by my parents and headed by my 19 year old painfully conniving and sniveling
cousin brother. there goes my quality time with myself where i introspect, reflect and reproduce. i haven't written in ages and i felt that mother's "absence of utmost quality" would help me connect to my lost side. it was ruined for my mother came back earlier than i expected. on the top of it, i have this monkey to deal with. naturally, my room is raided and so is my space.


This is where it all boils down to entropy. Simply put, Entropy is the degree of randomness.

a few years ago i was thinking that how everything in the world approached to zero degree of randomness or motion or emotions or anything. Entropy or the degree of randomness was something i read about in 11th grade. I believed, regardless of what the theory said that things in the universe tend to come to a state of rest. a few years later i realised that not only were the nonsensical things affected by it but also living things. actually the entire gamut of emotions, wasted feelings, reactions, actions-controlled or uncontrolled, etc. wanted to stabilise themselves. they wanted to maintain an equilibrium- both inner and outer. as much as i hate it now, i prided myself for realising that then.

I was so wrong…

human kind can not gain anything without first giving something in return. in order to obtain, something of equal value must be lost. that is alchemy's first law of equivalent exchange.
- May 09, 2011

It will take too much to extract a writing from you now, and that is not a reflection on your skill but your itch.

Yes its Me. I leave no trails so its easy to become oblivious.
You will, in due course.

scenes from a memory said...

love for the supreme

7.7 breakneck equilibrium
7.6 liquid tension experiments
pain & gain
boy hits car
7.5inertia
the we of me
w.r.o.a.t.c.h. revisited
the walk
natron
7.4the ouroboros
thinner than air
7.3the melting point of wax
7.2you am i
7.1double helical
rust
nicotine and caffeine
why i am an atheist - bhagat singh
like rain on your wedding day
good wounds to be alive
figure 09
the art of minimal conversation,meaningful observation and miniscule conclusion
dear god
the blue purgatory
half way through
the unfinished story
edmond dantes
i know you know that we do
once upon a manic laughter
to the bitter sweet departed
somewhere i belong
mono
mad elizabeth and crazy charlie
mad bitches and indian man - of Xs and Machines
mad elizabeth
wry
burden
sophi's roof
chaos; head
luck to fade
the shortest day
conversation for the mad
white butterfly
sodium-emo
gay
wreak
the object of your affection
the bastards of mis-education
unsent2
where is the panacea?
the reluctant fundamentalist
acousma part-2
untitled
voices
repentance in qibla
digging up the corpses

scenes from a memory
"i feel an air around me. an air that is composed of a complete lack of dreams, memories, and or association. and i have found there is no joy greater than solitude; for there is no lust greater than the one to wander...and i wander.." -k'